How the War in Ukraine Ends. Myroslav Shkandrij is Professor Emeritus at the University of Manitoba where he taught in the Department of German and Slavic studies from 1987. Recently he has been teaching at Columbia University in New York. Shkandrij’s research is focused on Ukraine’s cultural history, the avant-garde, nationalism, and Jewish-Ukrainian relations.

The Future of Winnipeg: The View of an Economist. Gregory Mason has a PhD in management, economics and city planning.  He has been teaching at the University of Manitoba since 1974, in land economics, transportation, and housing. After starting and growing a private consulting firm, Prairie Research Associates, he has returned to urban land economics, studying the process of reconciliation through urban reserves. This connects with his long interest in the economics of cities.

Songs on the Violin of Hope. Generously provided by the Winnipeg Symphony Orchestra, the “Klezmer” violin on which Sonia Lazar is performing, is one of two instruments brought to Winnipeg from the Violins of Hope program. Amnon and Avshi Weinstein, Israeli luthiers, have been collecting Holocaust violins, restoring them and learning from the owners their stories of injustice, suffering, resilience, and survival. Together with pianist Leanne Regehr Lee, Sonia Lazar will be performing a program of Jewish music on this very special violin.

A Legacy Project for Future Generations. Martin Itzkow is a leadership coach and convenor of deep change. He is the CEO of the Coalition of Manitoba Cultural Communities for Families Inc. Martin and his cousin Colleen Cohen led a family initiative of research, discussion and planning with a large group of “Kudinsky Family” members throughout North America. They created a website, to provide a repository of knowledge about the family’s roots, history, traditions, and stories, for the benefit of current and future generations.

Where Did My Lettuce Go? Dr. Barry Prentice is a Professor of Supply Chain Management, at the I.H. Asper School of Business, University of Manitoba, and Director of the Transport Institute. In 1999, National Transportation Week named him Manitoba Transportation Person of the Year. Dr. Prentice will help us understand the issues that result in missing products on store shelves, and the external risks to our agricultural supply chains.

War and Sustainability. Can we talk about war and sustainability at the same time? Known for his often-pungent op eds in the Free Press, Dr. Peter Denton is a local activist for sustainability and ecological justice. Author of nine books, he is Adjunct Associate Professor of History at the Royal Military College of Canada. His work focuses on the interdisciplinary nexus of science, technology and society, especially ethics. 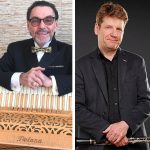 The Two Myrons. Myron Kurjewicz (Myroslaw) and Myron Schultz (Moishe), met on Selkirk Ave. Two business owners on the same block with the same name and the same love of music – one an accomplished accordionist who has performed solo and with dance troupes, the other a clarinetist known for his work with FINJAN and Black Sea Station. Nearly 40 years later they take the stage together sharing their love of the Ukrainian and Jewish music traditions. The Myrons will be joined on this musical journey by bassist Daniel Koulack.

Jazz from the 20s. Led by pianist Jonathan Alexiuk, with singer Chenoa McKelvey, this dynamic duo will provide an afternoon of swinging songs from the fabulous era of the 20s. Be prepared to sing along to Five Foot Two, Tea for Two, Ain’t She Sweet, and other favorite tunes!

Songs from the Brill Building. Led by music director Phil Corrin, in collaboration with two outstanding vocalists, join us for a visit to New York City’s Brill Building, the artistic home of hundreds of the 20th century’s most popular songwriters. Enjoy the hits of Carole King, Neil Diamond, Burt Bacharach, Johnny Mercer, Paul Simon, Ellie Greenwich, Neil Sedaka, and more as we tour the halls of this famous musical landmark!

DIY Food Tours: Winnipeg’s Lesser-Known Food Attractions. Matthew Singer moved to London, England at the age of 19. Living and travelling through Europe and the Middle East opened his eyes not only to different cultures, but also to their food. Since then, he has become an Archaeologist, and taken numerous food tours and cooking classes in different parts of the world. Matthew curates Do- It -Yourself Food Tours that highlight some of Winnipeg’s best and most unknown dishes.

“Music Made Visible”. Since moving to Winnipeg from Vancouver, Mark Rash has photographed the Winnipeg Symphony Orchestra, the Royal Winnipeg Ballet, the Manitoba Chamber Orchestra, and the Agassiz Chamber Music Festival. His images have appeared in the Winnipeg Free Press, The Globe and Mail, The National Post, and the Canadian Museum for Human Rights. In this illustrated lecture of his work, we see how Mark’s photographs reveal the players’ artistry and commitment, as he documents the connection between a musician and his/her music.

A Fresh Face in Winnipeg: WJT Artistic Director.  Dan Petrenko, a very new arrival to Winnipeg, has taken over the helm of Winnipeg Jewish Theatre. Dan is the youngest person to hold such a position in the Professional Association of Canadian Theatres.  Come find out why Dan has chosen WJT, and why WJT has chosen him.

The Koulack Family Band has been making music together since the kids were old enough to hold a tune, playing in the Klezmer Kids.  The father, Daniel Koulack, is a well-known fixture in the folk and Klezmer communities on his double bass, guitar and banjo.  George Bajer-Koulack performs on guitar, vocals and percussion, while his sister Ameena Bajer-Koulack, is accomplished on the banjo, fiddle and vocals. Expect to hear folk music tunes in Yiddish, Spanish, English and French!

The Very Groovy Things.  After starting out doing exclusively the music of the Mamas and the Papas in 2018, the Very Groovy Things have expanded their repertoire to include folk rock from Southern California of the mid 60s to early 70s, plus some Merseybeat and British Invasion. Songs by the Ventures, Gerry and the Pacemakers, Booker T and the MGs, and Simon and Garfunkel, are featured as well as hits by John Phillips from The Mamas and the Papas.

The Sadler Sisters. Vocalists Elizabeth and Ashleigh Sadler, in collaboration with an outstanding group of talented musicians, will have you singing along with Hits from the 60s and 70s Reimagined.  Close out the 2023 Music ‘N’ Mavens season with the amazing vocals and jazzy stylings of The Sadler Sisters.